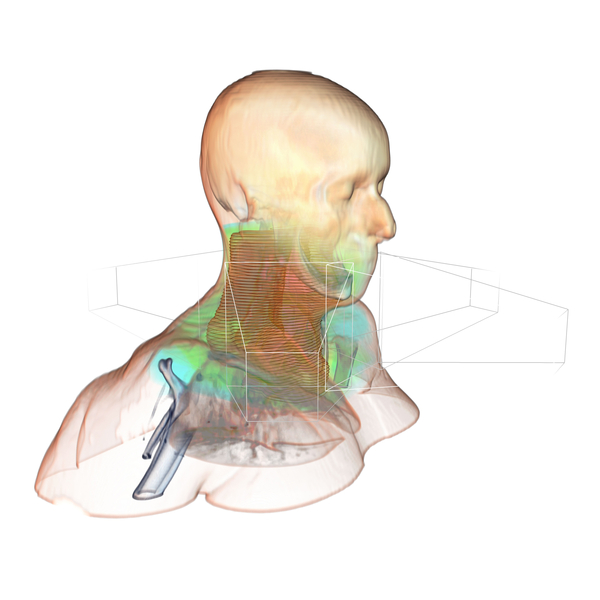 Radiation therapy is an established method of cancer treatment. The therapy consists of many treatment sessions and usually lasts for several weeks. During this time, physicians often have to adjust the treatment plan. By doing so tumors can be treated effectively and tissue surrounding the tumor is spared. Within the scope of the recently completed SPARTA project, the Fraunhofer Institute for Medical Image Computing MEVIS in Bremen developed several methods for facilitating and accelerating this adjustment.

At the beginning of every radiation therapy, doctors take images with a CT scanner showing the position of the tumor and the surrounding organs. Based on this imagery, they develop a detailed treatment plan. This plan indicates the number of radiation sessions, the radiation dosage, and the body areas to be treated. The goal is to completely destroy the tumor while sparing the surrounding healthy tissue.

However, the conditions change during the course of therapy. The tumor shrinks and its form may change. Weight loss may occur and patients do not always assume the same position during radiation sessions. This affects the course of therapy. In many cases, the initial distribution of the X-ray dose is no longer optimal and must be adjusted.

To ensure that tumors are targeted as well as possible in later sessions, doctors take CT control images. These images help determine whether the tumor has shifted in the body due to weight loss. In such cases, sensitive organs can be accidentally damaged by moving into the radiation path.

To prevent such complications, doctors compare the original CT images with the control images and adjust the radiation plan to the new situation. This replanning can become very complex and time-consuming. Within the scope of the SPARTA project, Fraunhofer MEVIS developed several software tools for accelerating and simplifying this procedure. The experts worked closely with doctors from renowned university clinics to make the tools as intuitive as possible.

Image registration: MEVIS researchers developed algorithms that automatically align different images of the same patient. The program corrects the different positions patients assume during radiation sessions. It also distorts and shifts the images, if necessary, to align the structures. This eases determining how an ulcer changes during the course of therapy. With the University Clinic in Dresden, MEVIS experts further developed and evaluated an algorithm to register lung images. It displays the lung precisely in different breathing phases.

Recontouring: To plan radiation therapy, physicians contour the organs and the tumor as precisely as possible and plot their shapes. The computer gives suggestions on how the contours should look, but in practice, doctors need to adjust and correct these suggestions in a time-consuming process. MEVIS researchers created a tool to accelerate this process. The tool transfers the contours of the initial therapy plan to the current situation using the image registration results of the current CT image. Inaccurate contours ’snap‘ quickly into place with help of a snapping tool. A contour propagation method for head and neck data was tested in cooperation with the Ludwig- Maximilians-Universität in Munich. The results show that doctors needed only half as much time for post-processing.

Visualization: Which alternative radiation plans are optimal? Is the initial therapy plan still accurate? Should it be readjusted? Experts in Bremen created special tools for visualization to help doctors answer these questions. The tools show the uncertainty that arises from patient motion during sessions across several weeks of therapy. 3D depictions show a series of images. The bigger the movements during irradiation, the blurrier the images compared to the reference. Such illustrations could help decide if the radiation plan should be readjusted or not.

The researchers combined these and other software components into a demonstrator. The separate elements can be relatively easily integrated into existing medical devices. Fraunhofer MEVIS is already in discussion with commercial partners.

SPARTA stands for „Software Platform for Adaptive Multimodal Radio and Particle Therapy with Autarkic Extendibility“. The interdisciplinary joint project started on April 1, 2013 and ended on March 31, 2016. The consortium encompasses ten partners, including research institutes, medical technology companies, and university clinics. SPARTA received a funding of around eight million euros from the German Federal Ministry of Education and Research (BMBF). For further information: www.projekt-sparta.de

Your email address will not be published. Required fields are marked with *